I wanted to take a minute to sit down and document my recent trip to Europe so I can always look back and remember what an amazing experience I was lucky enough to have!

I traveled through Barcelona, Paris, Porto, and Mataro with two of my best friends from college. My friend Julianne is teaching in an English immersion program in Mataro (about 30 minutes north of Barcelona) and Chelsea and I decided it was a perfect excuse to go visit her and also experience as many other cities as we could in the 12 days we were there. We took off from Logan Airport on Tuesday evening at about 10:30, but not before we had a few glasses of rose at Stephanie’s. It was an overnight flight so I slept almost the whole way so that I would be wide awake upon arrival in Barcelona at 11am.

We jumped right in and took the subway from the airport to the Arc de Triomphe train stop which was near our hotel. It was a lot easier to maneuver through the Spanish subway system than I thought it would be! We got off the train and rode the escalator up to street level and the very first thing we saw was the gorgeous Arc (the entrance of the city) before us. It was breathtaking and SO exciting. The weather way amazing that first day so we rolled out luggage to the hotel, checked in, changed out of our travel clothes into shorts and tank tops and hit the town. We walked from the hotel to the beach which was about 20 minutes away. We were hungry so we picked one of the many restaurants that were right on the boardwalk and sat and had nachos and paella and of course sangria!

After lunch we walked back to the hotel to check out the rooftop. We ordered margaritas at the bar in the lobby and took them up with us. It was unseasonably warm and not quite roof-deck season for the locals so it was just us and 1 other group up there. We took lots of pics and sipped our margs, which were served to us in martini glasses.

After that we went down to the room to change and find a place for dinner. We were pretty tired from all that travel so we didn’t want anything too fancy, just something casual for a bite to eat. We stumbled upon a little sidewalk restaurant called restaurant arc de triomf not too far from the hotel with outside seating and a decent looking menu. We ordered charcuterie and white wine and chatted about all the fun days ahead of us! The little sidewalk restaurants are so perfect for people watching! We went to be by 9 pm that night, we were exhausted! 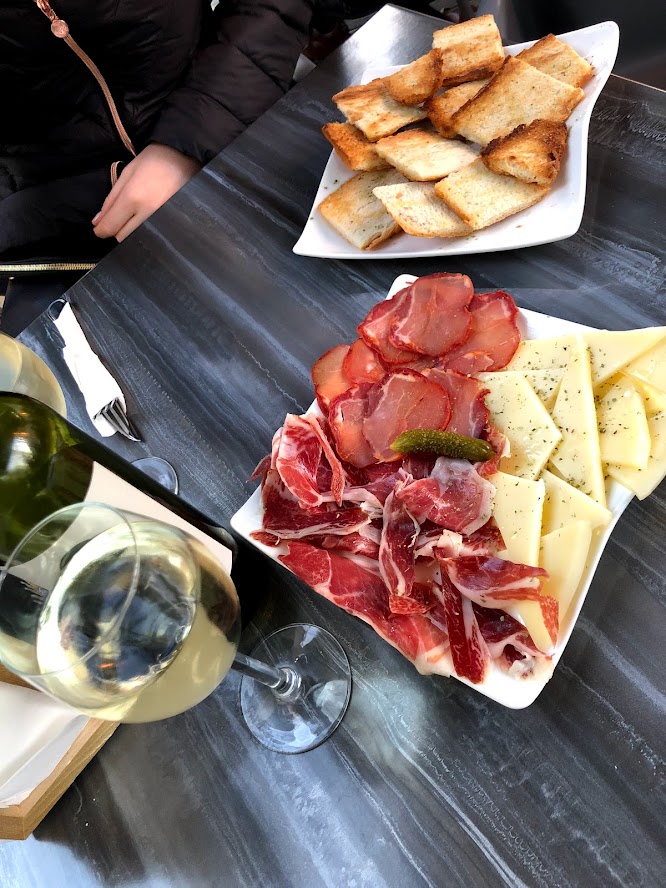 The next day was one of my very favorite days of the entire trip. We had schedules a bike tour of Barcelona that started at 12 noon in the old city square, so we got ready for the day (obviously in our cutest instagramable outfits) and headed that way to find someplace to eat breakfast. We stumbled across a super cute corner coffee shop and got the most delicious chocolate croissants and I got a cappuccino (which i ended up drinking every day on the trip, SO YUMMY). 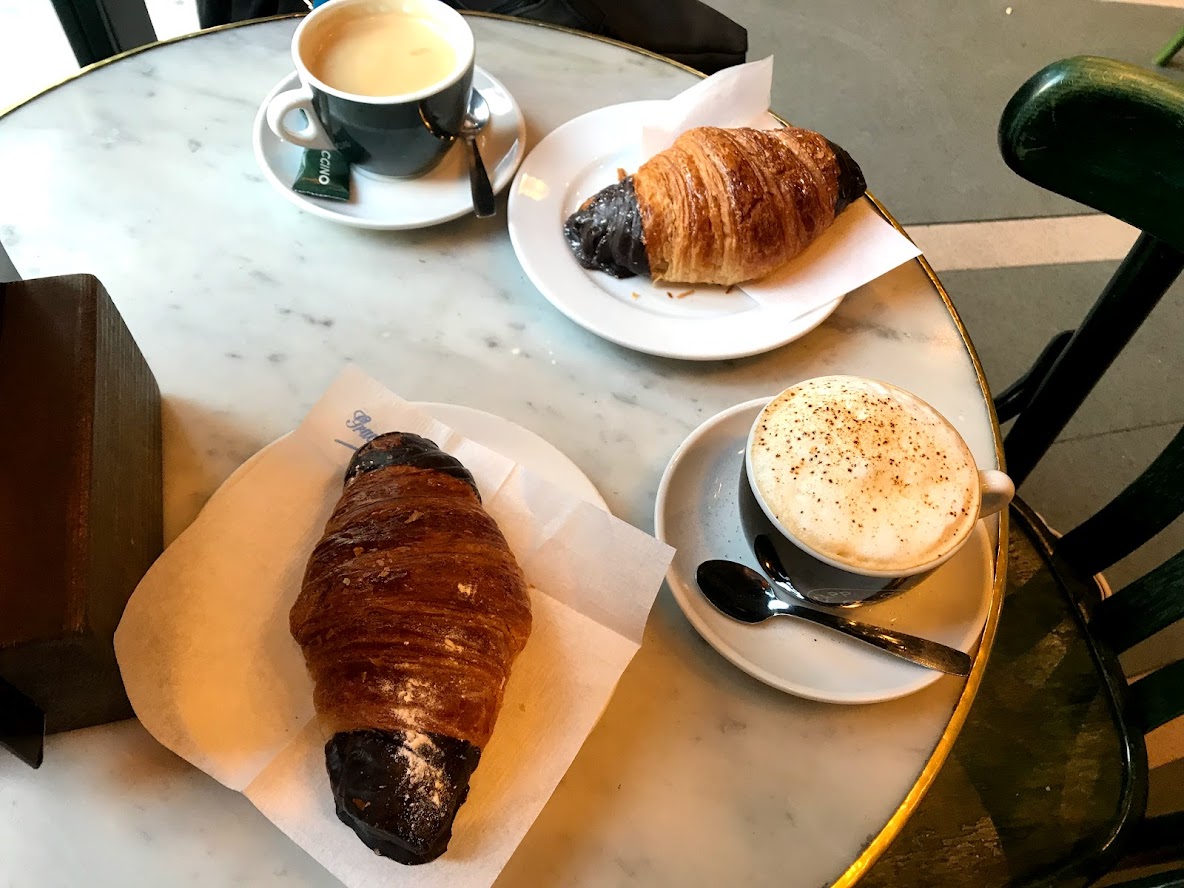 Then we walked around a bit and explored before meeting our group for the tour at 12 noon. The group was made up of mostly people our age with the exception of one couple in their mid forties. Everyone was so nice and so much fun which made the day that much more enjoyable. Our tour guide was so knowledgeable and we learned so much about the city which was perfect since it was just our very first full day there. The tour took us to the Cathedral of Barcelona, a theater that was designed by Gaudi, the Arc de Triomphe, a fountain, a bull riding arena, La Sagrada Familia, and the harbor. We stopped in the middle for lunch at a super cute restaurant on the beach, we all sat at one big table and drank the local beer. I got a Cesar salad (not very Spanish but it’s what I was in the mood for!) 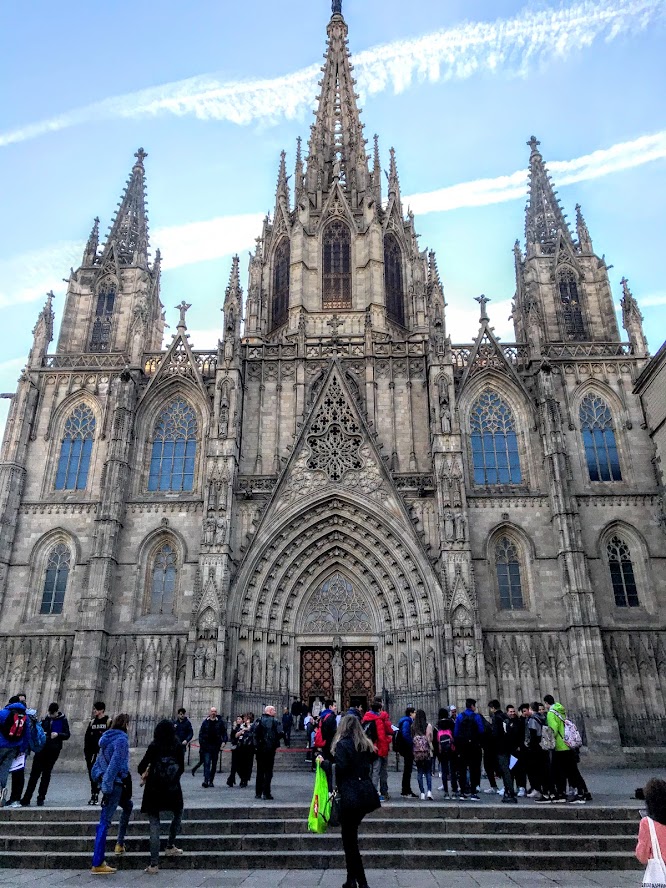 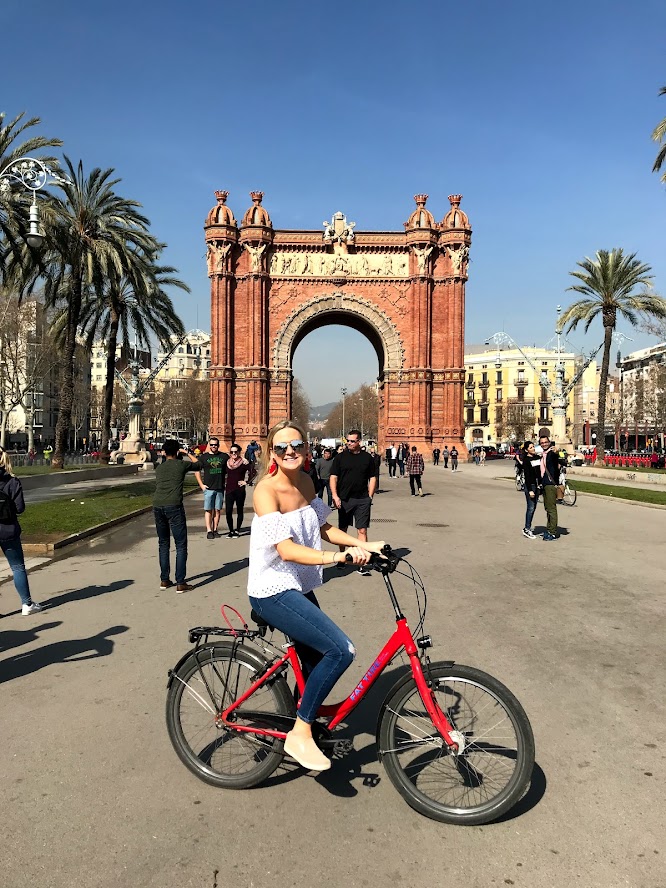 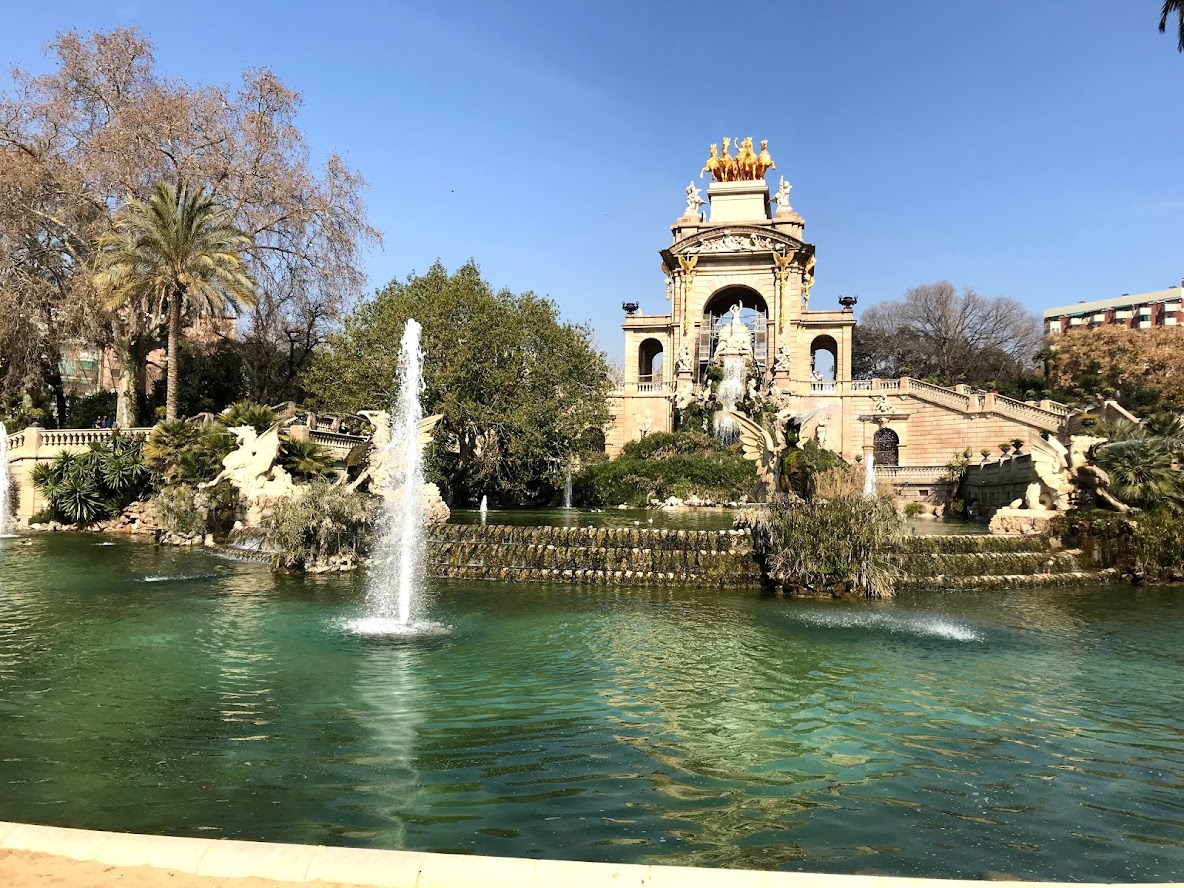 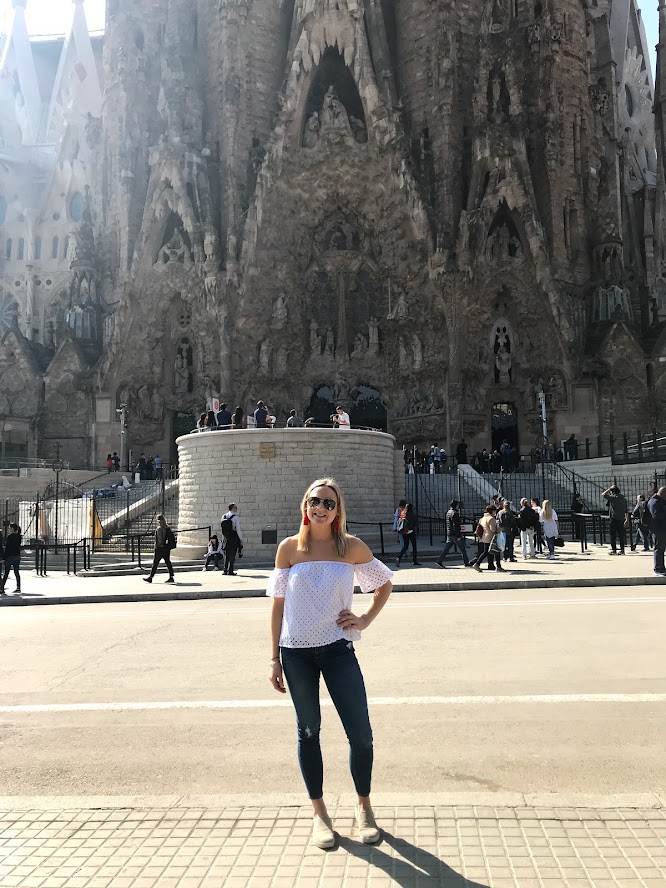 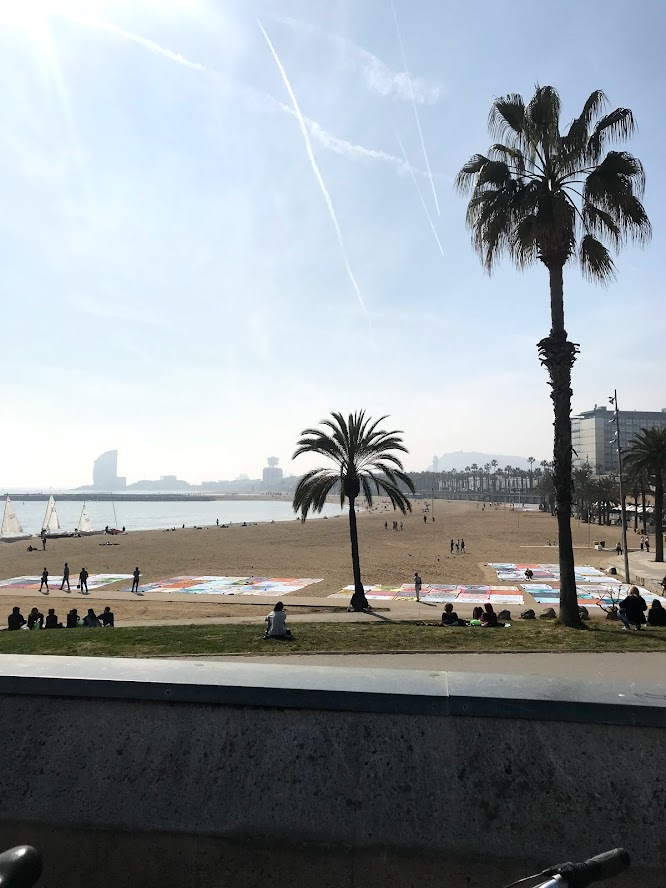 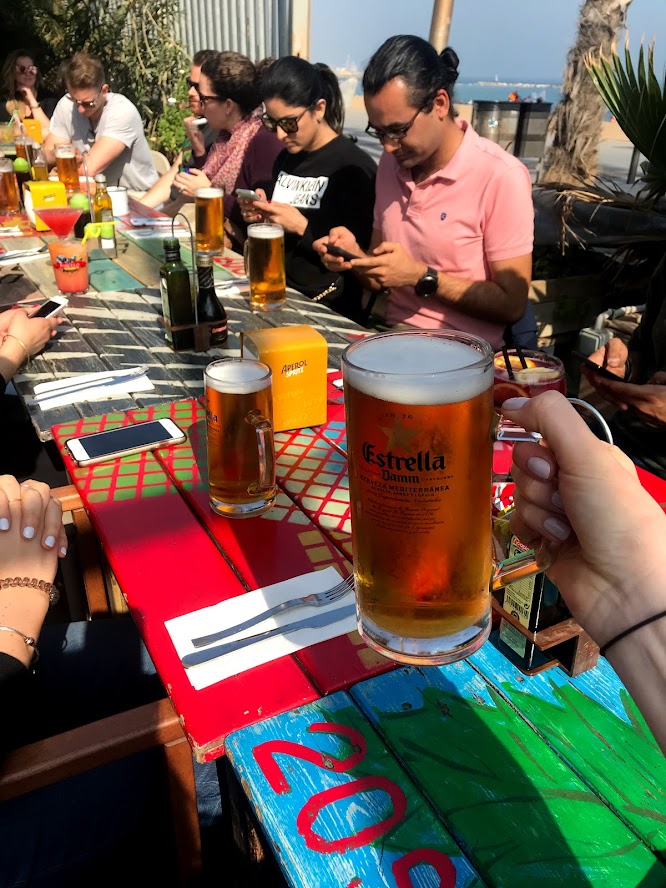 After the bike tour we headed back to the hotel to freshen up. On the way back we stopped so I could get an ice coffee from the place where we got breakfast. This was the first real cultural difference we encountered. But apparently ice coffee there is actually just a very sweet coffee slushie. It was foul and I tossed it. We changed into new outfits and headed back out to walk around the city. It was still beautiful outside so we sat out on a patio and had another local beer. 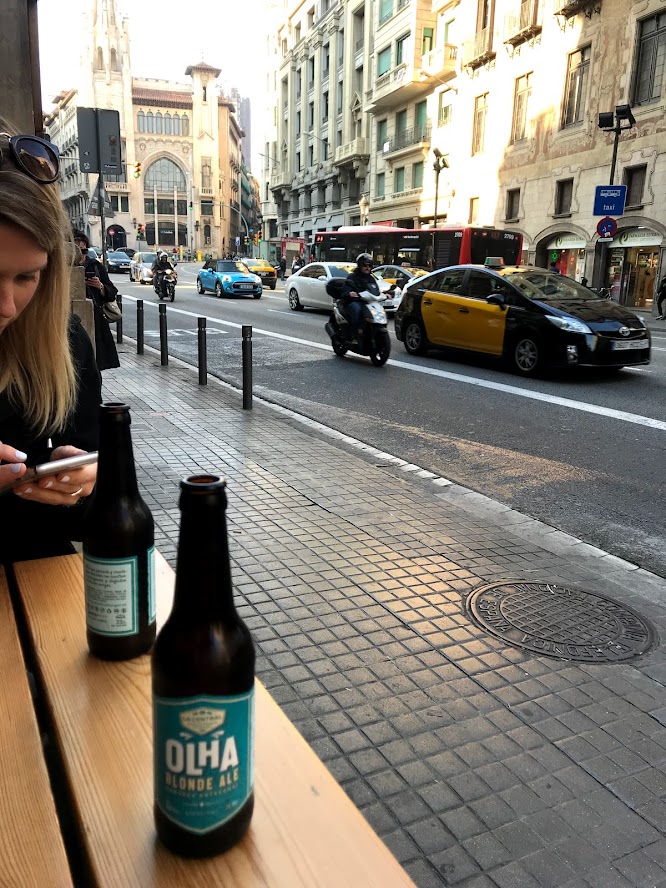 We walked up to the “Rodeo Drive of Spain” because we obviously couldn’t miss that! The street was beautiful and I can totally see where it got that nickname. Between the architecture of the buildings, the high end fancy shops, the little cafe’s all around, and the wide sidewalks, it was like out of a movie. We window shopped and stopped to have a beer or a snack here and there. We did SO much walking the whole time we were in Europe, but especially in Barcelona, it’s such a walk-able city and in my opinion it was the best way to see it all! 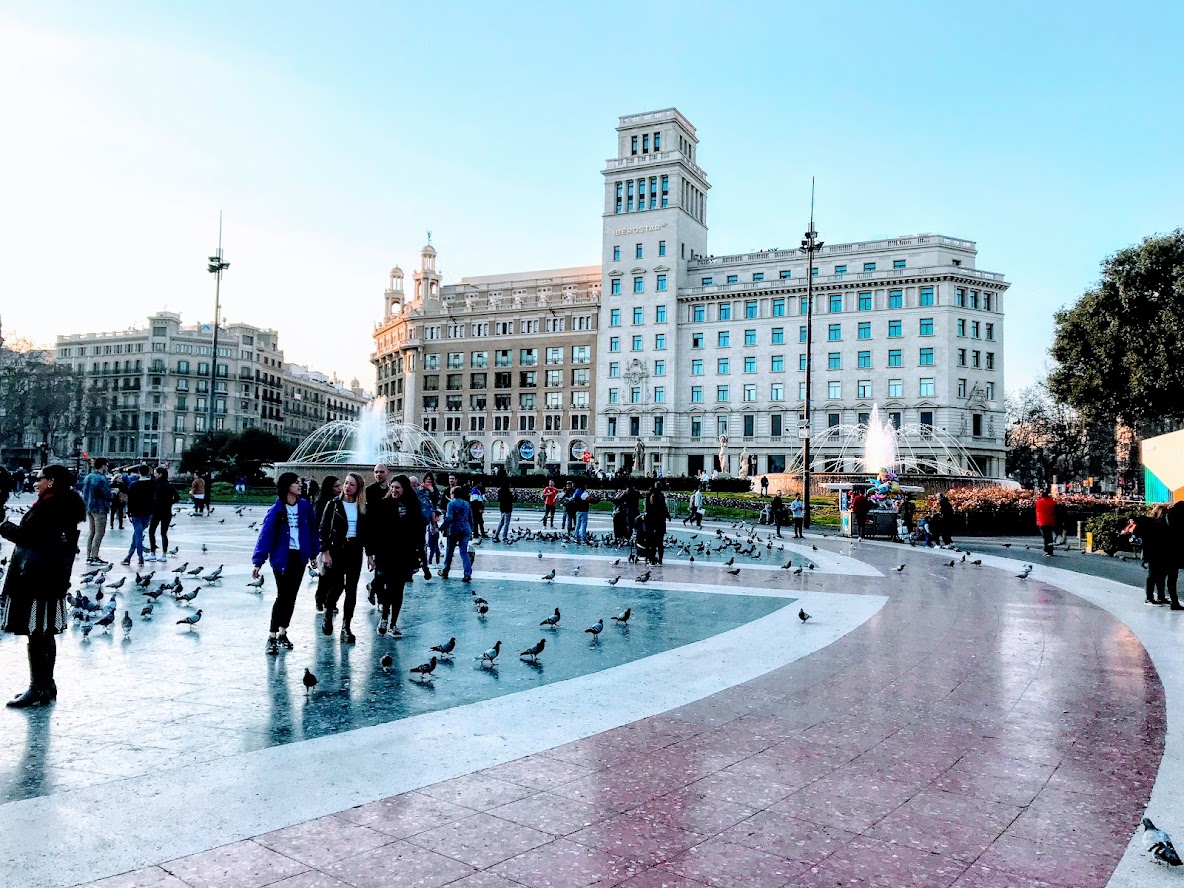 That night we went to a restaurant called Quillo Bar which we had found during our months of researching the cities we’d be in. It was a trendy cute place and we sat a a high top table in the bar area. We ate tapas style just like the Spanish pretty much the whole time we were there. This night we ordered 2 types of croquettes, chicken salad, and fried fish. We assumed that the fried fish would be like the fish that comes when we order fish and chips here in Boston. Boy were we wrong. When the fish came out we immediately said oh those aren’t ours, but he insisted they were. After he put them down and walked away, we realized that those were the fried fish. They were FULL fish with skin and eyes and tails and bones that were put into a fryer and slightly salted. See what I mean? YIKES. 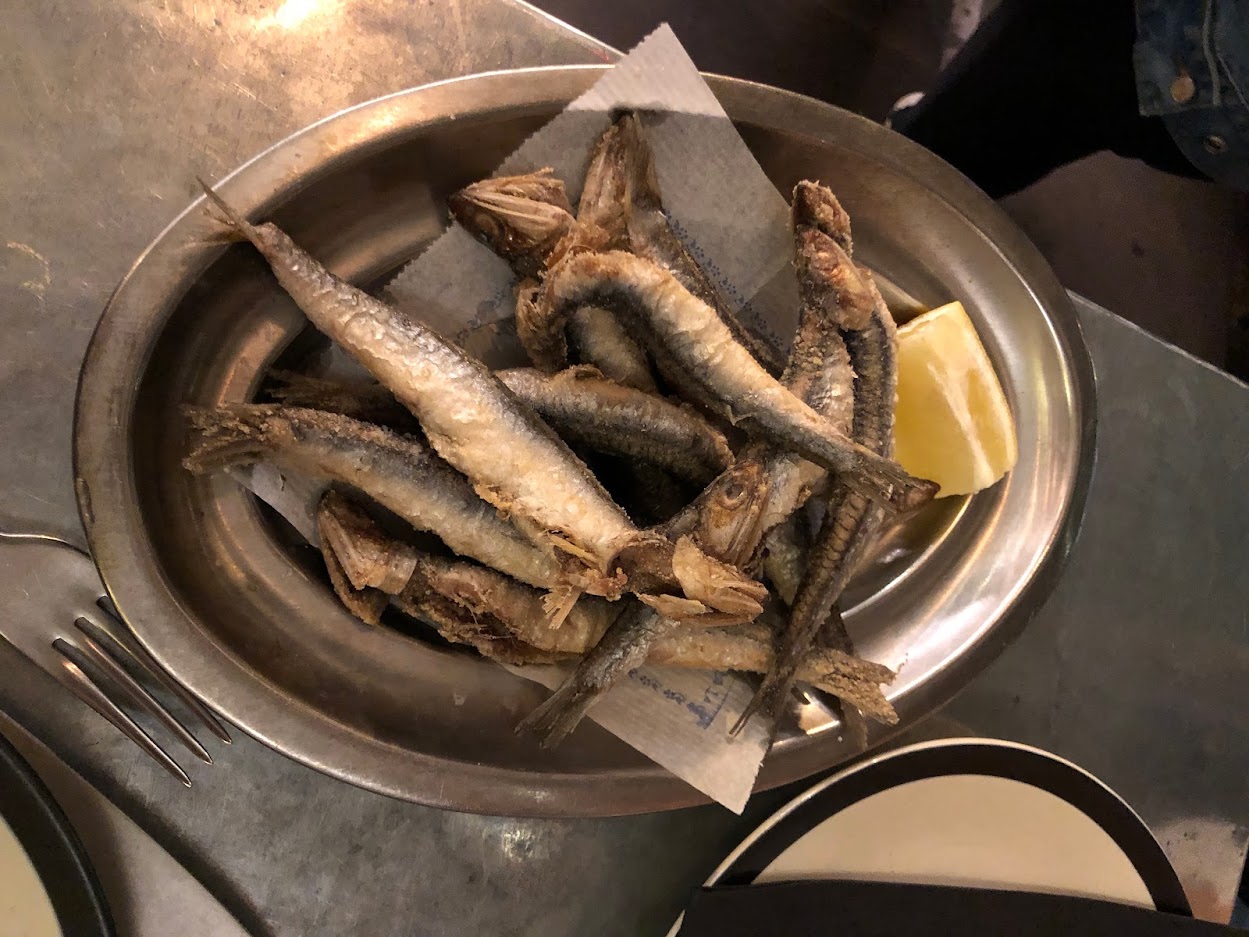 Since dinner was pretty light we ended up getting hungry again later in the night (like 11 pm) and went to a place near our hotel for pizza (&beer duh).

The next day was the way we were going to tour Spanish winery’s, we were so excited for this day! We started with breakfast at a cut little 1950’s Spanish style tourist trap near where we were set to meet the bus. 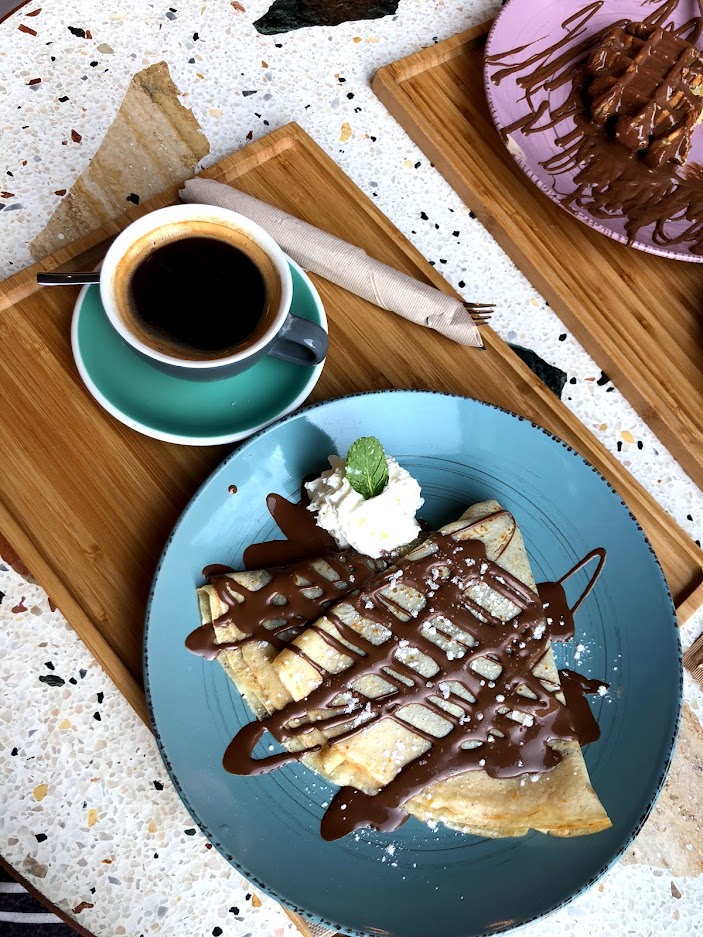 I feel like we always thought the places were “local” when we first saw them, but most of the time they turned out to be very touristy. Oh well, you win some you lose some.We chose a cute little table next to the window which looked out onto a busy square right in the very middle of Barcelona. All of a sudden we hear an extremely loud bang that sounded like a cannon or a gunshot. I’m extremely jumpy even in America, so you can imagine how on edge I was in another unfamiliar country. I of course jumped and screamed, and then started to panic. We then notices the protesters across the street, their signs were obviously all in Spanish so we had no clue what they were actually protesting, but it was unsettling. We finished our crepes + cappuccinos and got out of there as fast as we could. We met the tour group outside of the Hardrock right in the city center. It was a pretty small group, maybe 8 of us? But we had a massive luxury coach bus with leather seats all to ourselves. Chels and I sat in the front so we had a clear view out the huge windshield as we drove out of Barcelona and saw the scenery of the surrounding towns. As soon as you get outside the city it’s very industrious and run down, it was really interesting to see since it’s probably a more realistic view of culture in Barcelona than the wealthy part of the city. 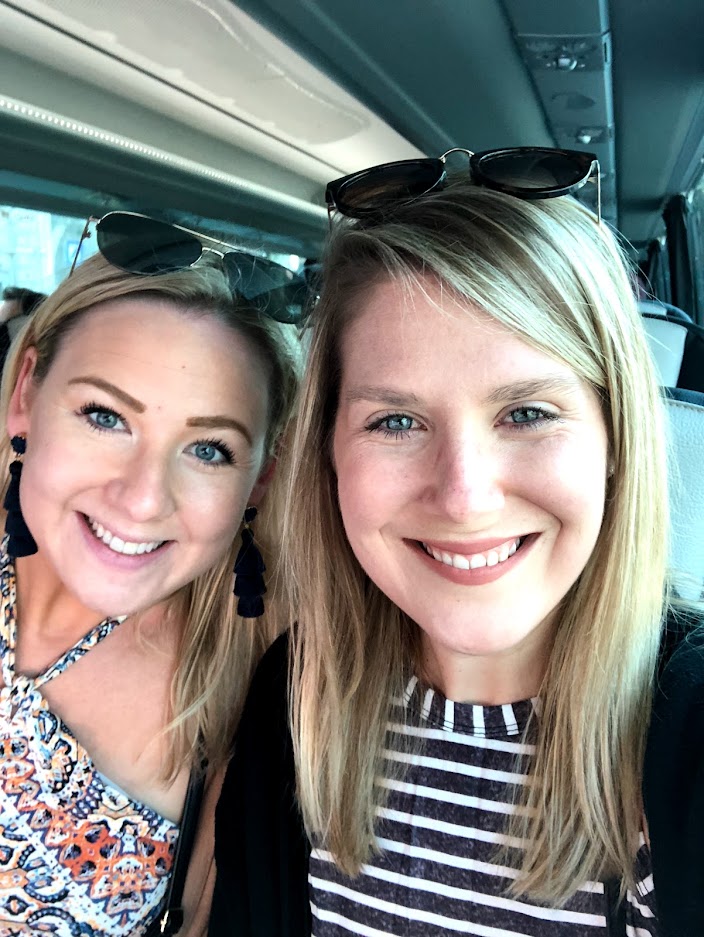 The first winery we stopped at was Ca N’Estella which is one of the oldest wineries in Spain. It was so picture perfect (literally MAJOR Instagram moments). 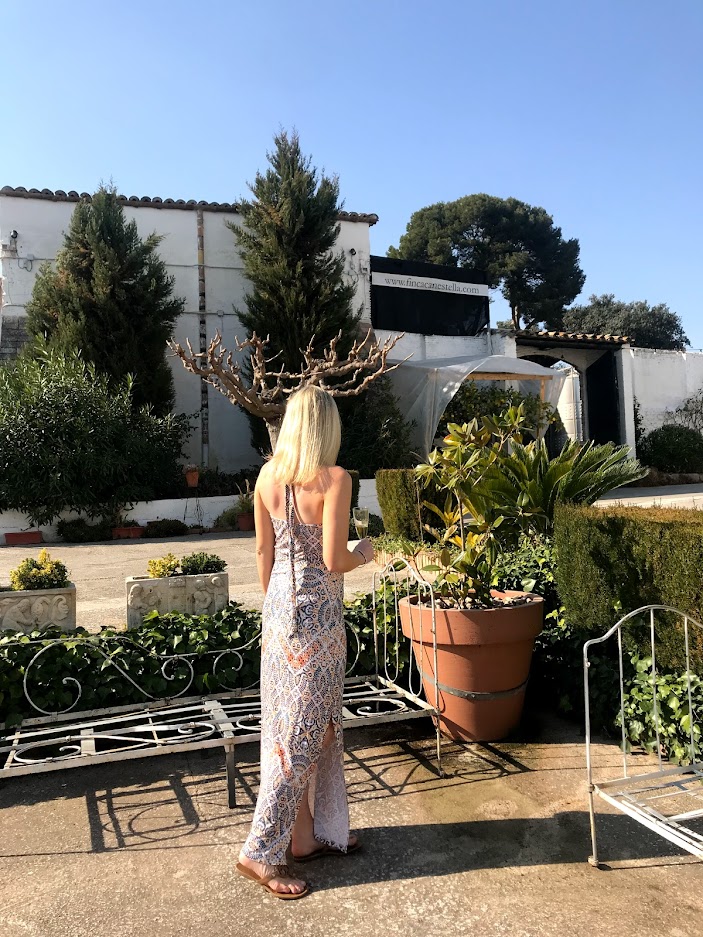 They took us into a tiny dark tiled room lit only with a few candles surrounding a bottle of Cava & 8 champagne flutes. This room used to hold thousands of gallons of wine while it aged. The walls were ceramic tiles and cool to the touch which kept the room temperature controlled. 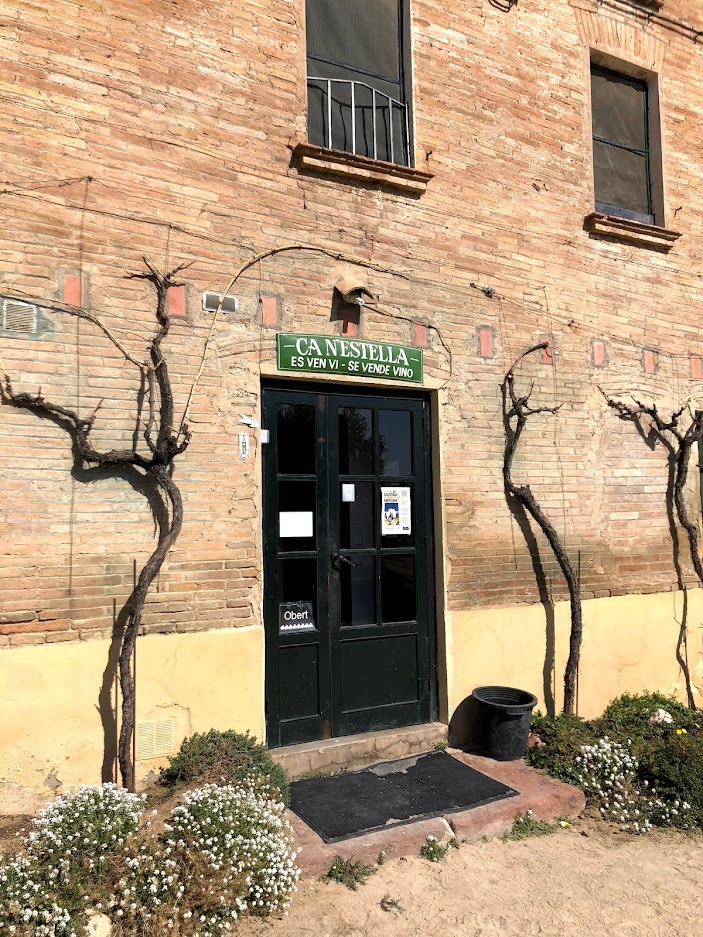 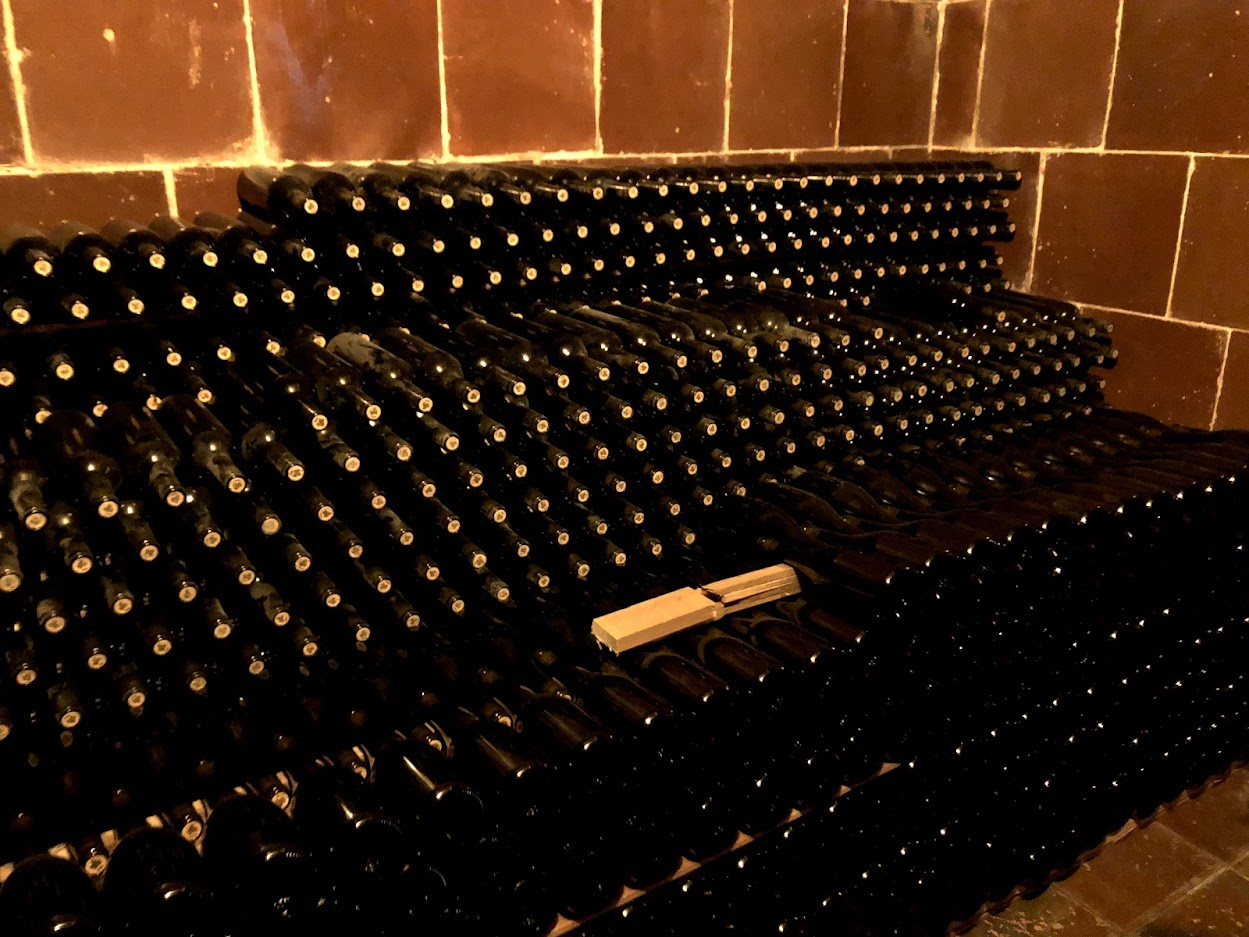 This was the old way of aging wine that was used back in the day when this winery opened, now they use huge steel vessels to age the wine that are easier to control temperature wise, and probably a lot more sanitary! Our tour guide popped the bottle of cava and poured us each a taste, they have you taste it first in the dark so that you can use all of your sense more clearly. It was delicious! 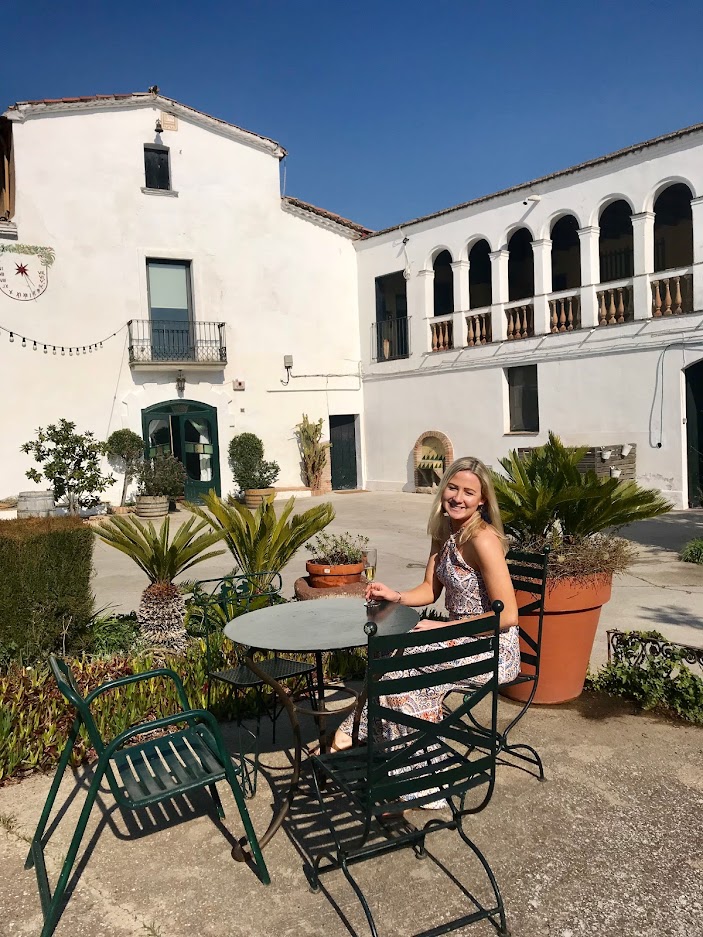 Then we went inside the winery which happens to also be where the owners of the winery live. Our guide told us that we were not allowed to take photos since it’s their private residence, but it was such an amazing experience. They had 3 more wines for us to taste all paired with a small dish. The first was delicious french bread which we squashed tomato on top of followed by a drizzle of olive oil and garlic rubbed on the other side. There was also some prochoutto to put on top. Then we had a “everything left in the fridge” type meal, which our guide told us is a Spanish specialty. They take whatever they have available to them and make a simple little dish. This one had beans, pepper, and some other random things, but it was delish! They also served this with a potato quiche, and____

Then we saw the room where they store all the wines, and were blessed to be in the prescense of THIS MUCH rose: 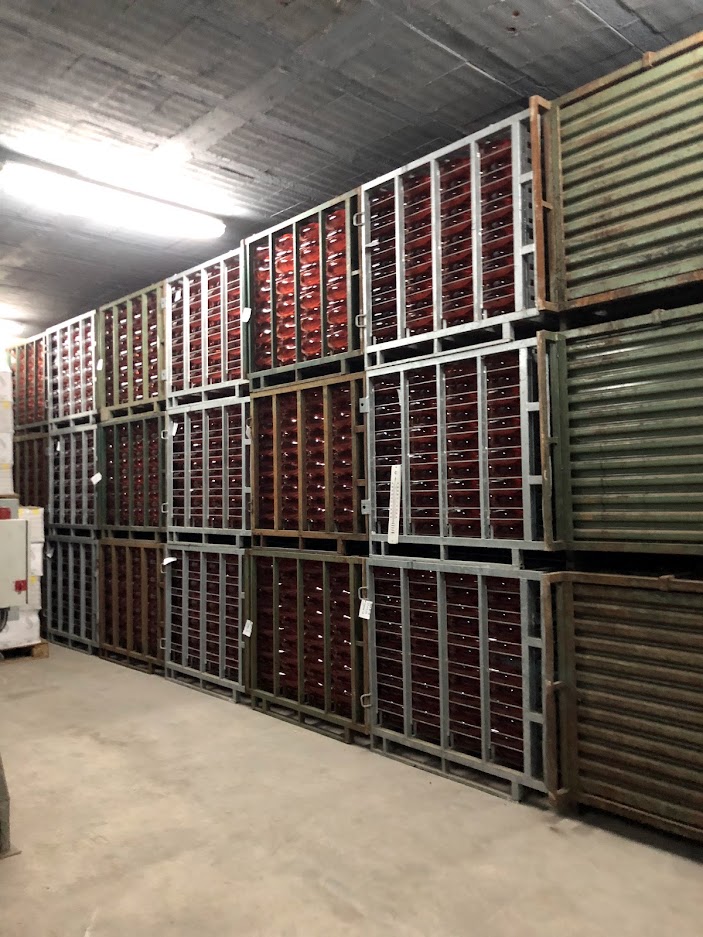 Stop #2 of the day was a larger winery just about 20 minutes away from the first one called Ollen Del Mas. This one was owned by a wealthy Spanish man who started the winery in his very own castle (casual). 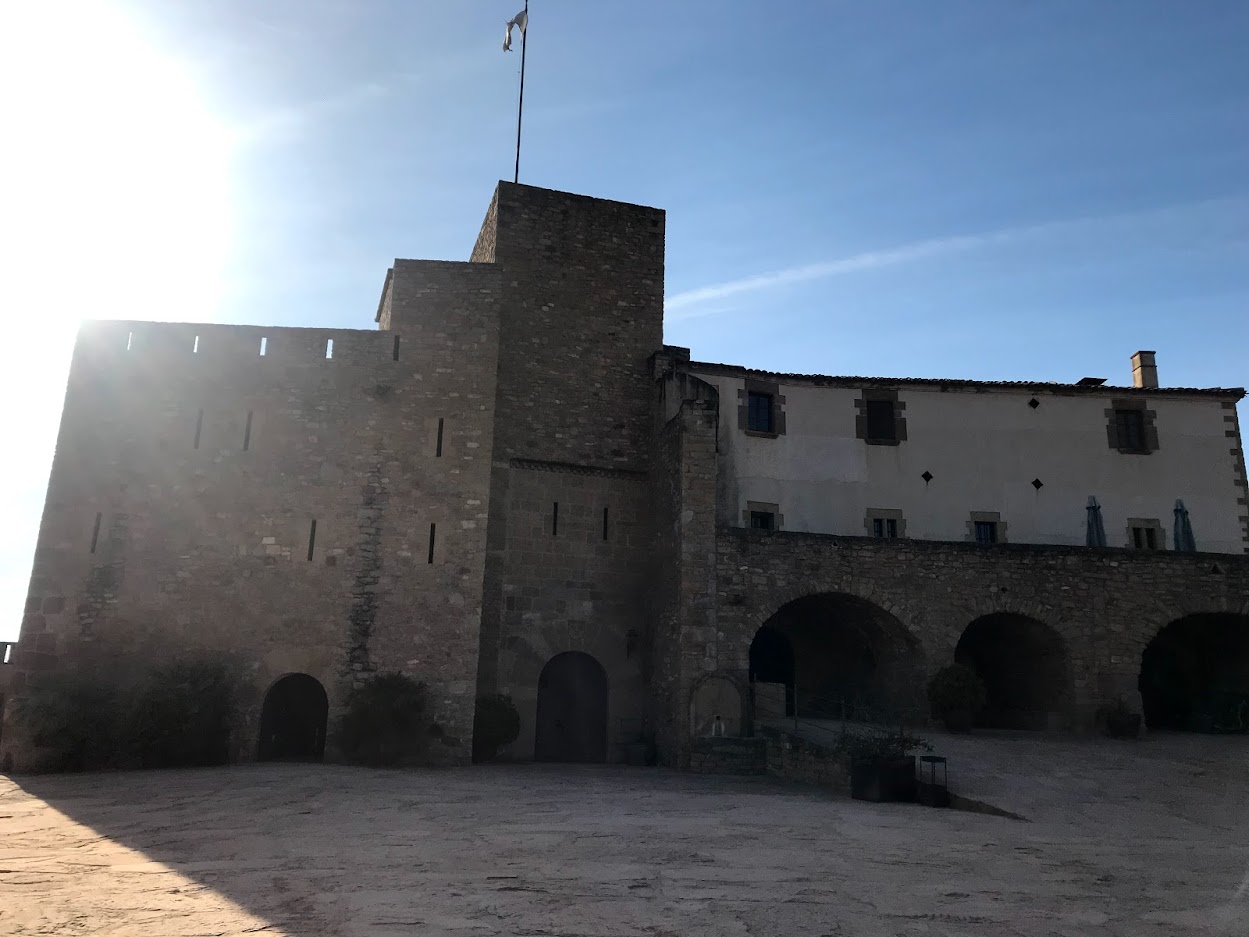 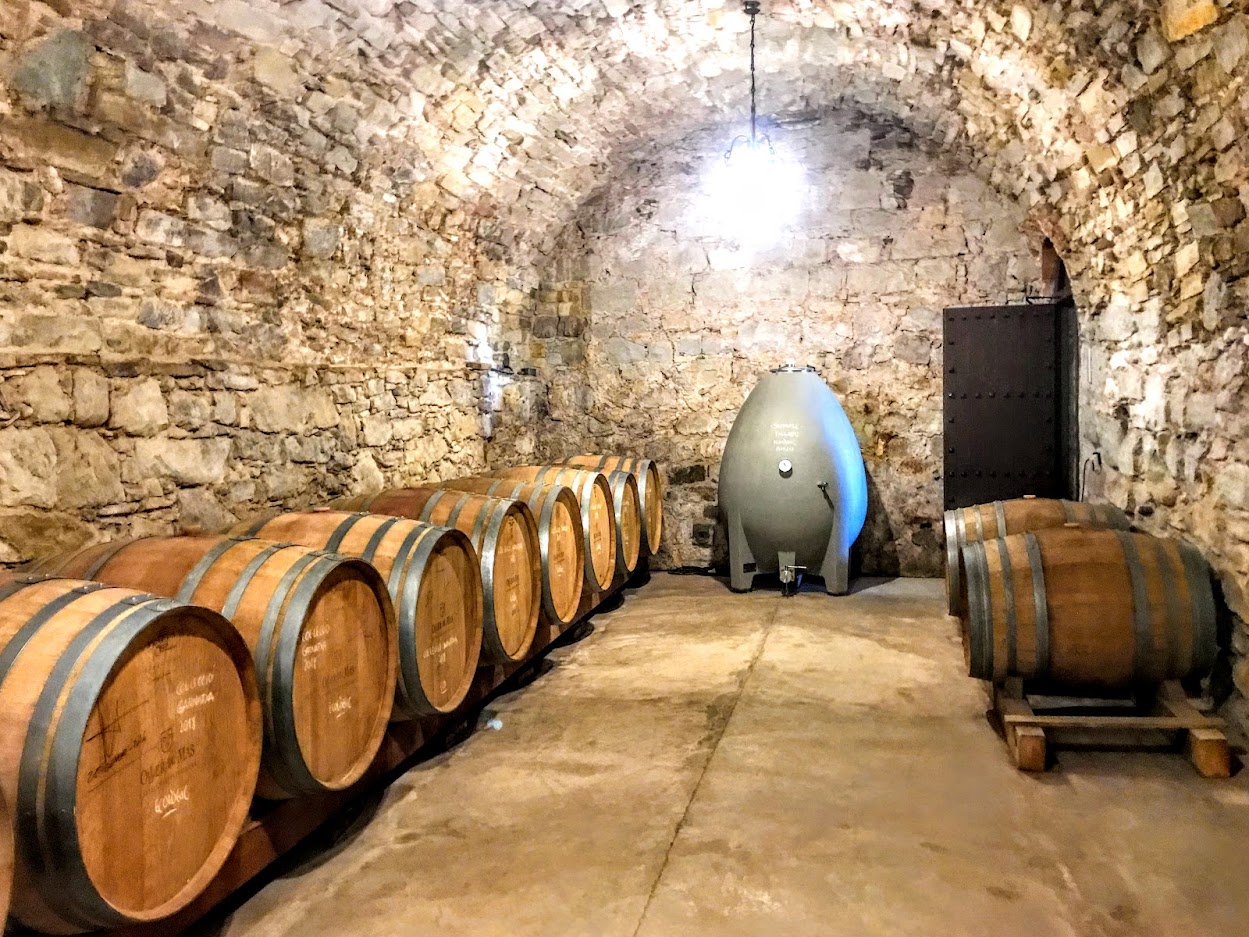 We tried 3 wines all paired with (very strong) cheese. After the tasting we headed up to the top of the castle to enjoy the view. It was absolutely breathtaking. It was the most beautiful blue-sky day and you could see for miles across the Spanish countryside. Of course it was the perfect moment for a photo op. I mean we didn’t wear a perfect wine-tasting appropriate maxi dress for nothing! 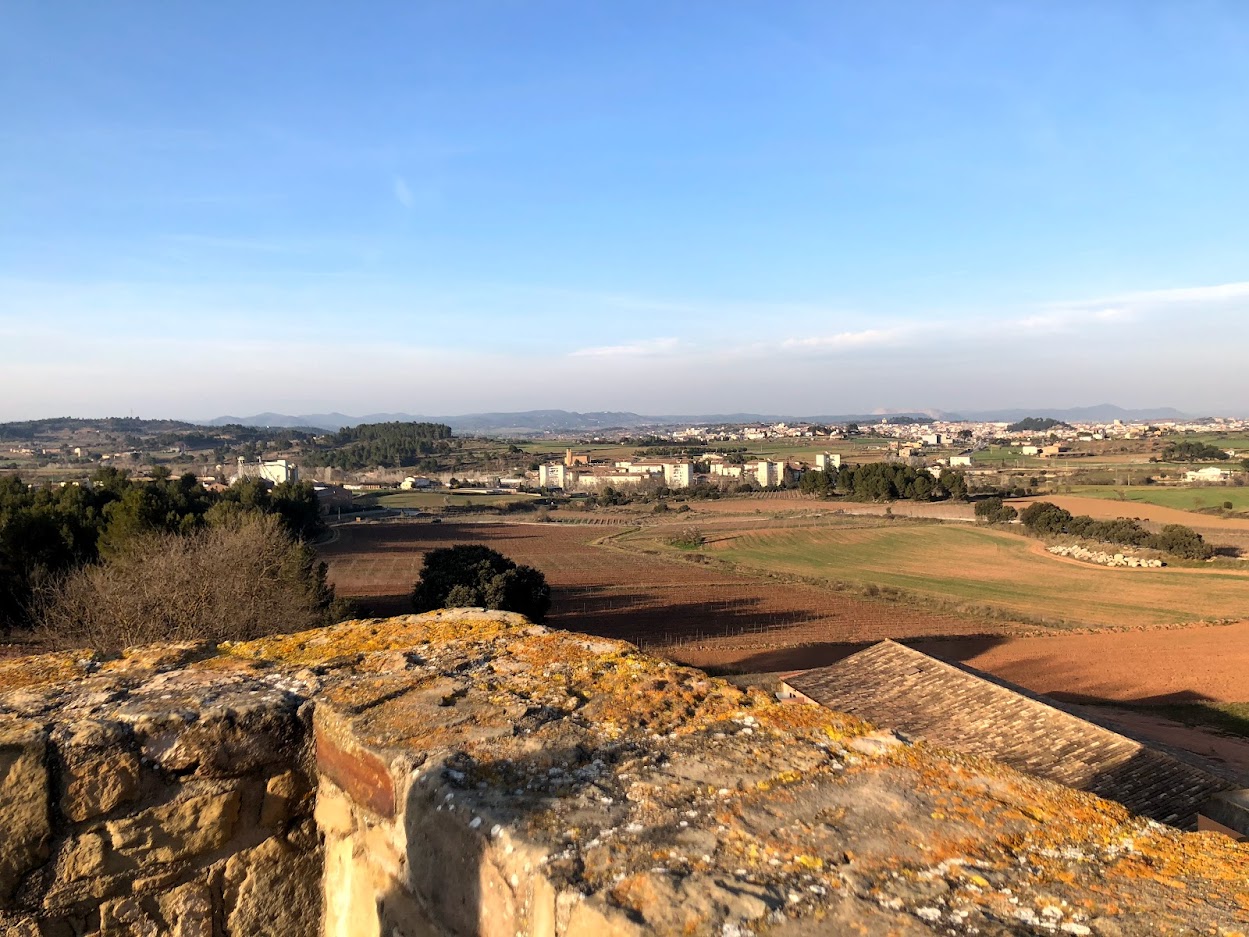 Then we started the hour long bus ride back into Barcelona. Juliann met up with us that night in Barcelona and we had dinner at an amazing little Tapas Restaurant that was recommended by her boss. It was so delicious and nice to finally have someone with us who knew the area/culture/food a little better than us. We caught up and chatted about our travel plans over champagne, espresso martinis, and tapas.

We had a VERY early flight to Paris the next morning so we hit the hay early (ish) that night.